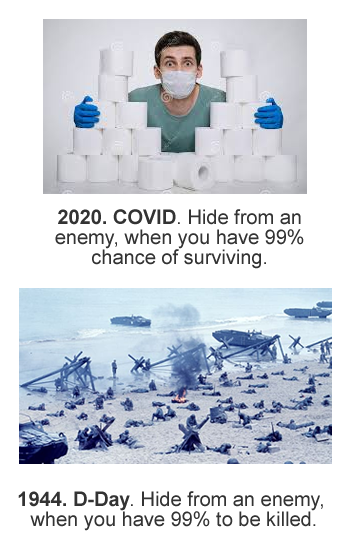 The phrase “asymptomatic intelligence” is a term that describes most subtly the trait of people who show signs of intelligence only periodically or never. The expression appeared during the COVID pandemic, and just as there are some carriers of the SARS-2 virus who do not show any of the symptoms of COVID disease, so do people who do not show intelligence except perhaps accidentally or not at all.

The interesting part in the context of the current crisis generated by the COVID pandemic is that “asymptomatic intelligence” is also manifested for respectable people: opinion leaders, leaders from different industries, politicians or ordinary people. There is a common opinion that if you stay at home, you isolate yourself from not spreading the virus, we will do it for the greater good of our society. But the facts indicate opposite: the pandemic has shut down or slowed almost as many companies as the economic crisis from 2008-2009. People who suffer from asymptomatic intelligence do not think till the end. The COVID pandemic blinded us to really see the impact on society, namely that the biggest evil is not the risk of becoming infected with the SARS-2 virus, but the risk of entering a more severe economic crisis than in 2008 or the risk of armed conflicts due to the chaos created …

And here begins the story I want to share with you.

At the end of 2018, when the owners of the company we worked for decided to sell the most profitable part of the business, I was still at the peak of my career, being the local director of two companies in the group. After the transaction was completed, what was left behind was only a small group of unprofitable companies and projects. The following year, I had to lay off 80% of the people and, after that, the disaster began. Continuous cost optimizations were needed, cutting even the coffee money, to prove to the owners that we are on the right track. Then, when I didn’t have anything to cut, the first budget conflicts appeared between the directors of the companies that were fighting to save their skin from being expelled. When the state of emergency generated by the COVID pandemic began in Dec 2019, the company had no money for salaries. Due to lack of funds, lack of staff, due to frustrations and conflicts I had to leave the company.

I left happy that I got rid of the madness, but soon I would discover that things could be even worse. My departure coincided with the time when most companies closed or slowed down due to the pandemic. The jobs on the market have dwindled due to the fact that many projects have been put on hold and the management positions I aspired had disappeared overnight. And that’s how I suddenly woke up in the position of a man with no prospects.

I applied to all the jobs that came my way, even those that were 2-3 levels below my experience. The only companies that seemed to thrive in the crisis were very large companies with sales exclusively online. In almost every interview I have been, interviewers were shocked by my experiences and stories. They thought I was either crazy or that I was inventing to impress them. How could I explain, but seem credible at the same time, to a man who has managed in his life a team of up to 15 people that I have hired over 130 people in the last two years, but then I had to have 5 waves of layoffs and that I managed to reduce the cost of the center by 3x in the last 2 years, while salaries on the market were 2 times lower than some competitors, but still I managed to launch one of the most innovative monitoring products? Most of the people I talked during interview were calm, quiet people, on whose face you read inner peace, who made decisions in perfect order, not like running away hungry fox as I have been for the last two years… I received feedback in various forms: very cool… unlikely, suspicious, demented, greedy…

The failures to find a suitable place to work during the COVID period put my patience and logic to the test and I hardly managed to recover. I have often wondered if the difficult problems, I was subjected, affected my ability to see things correctly and to think like a normal person…

2. The best don’t make excuses (I’ve always tried to find an excuse in my unsuccessful attempts; yet failure is an important part of the learning process; and I might recommend following what great champions Michael Jordan or Kobe Bryant say when asked). about failure).

3. The problem with failure is that you don’t know if it will cost you or if you are lucky that you have a chance to do better next time. (I initially heard the idea in another form, but I didn’t fully understand it at the time: Remember that not getting what you want is sometimes a wonderful stroke of luck, said Dalai Lama.

4. Before answering a question, ask yourself what that person wants from you (during the missed interviews I realized that an answer can be good or bad relative to everyone’s level of understanding; therefore, before giving an answer, start with the next question, why does he ask me what he asks me? what does he really want to hear or find out? or does he directly ask the person what exactly he wants to know …)

5. Most people do not necessarily want to know the truth, but want to hear a story that complements or approve their own conviction. (not everyone is ready to listen to creepy stories and most prefer to hear beautiful, successful stories; failure stories are good to tell only if you are challenged).